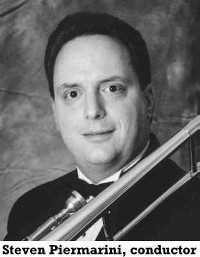 Steven Piermarini was appointed conductor of the Colonial Band in 1998 after serving in the band as trombonist and assistant conductor for 25 years. A Leominster native, he entered the world of professional music when he joined the Colonial Band at the age of 13. Since that time, Mr. Piermarini has pursued dual careers as a performer and as an educator, earning a B.M. in Music Education from the Berklee College of Music, and an M.M. in Conducting Performance from the University of Lowell.

As an educator, Mr. Piermarini taught instrumental music in the public schools for 18 years, earning numerous accolades and awards with his performing groups. He has served on the executive boards of the Massachusetts chapter of the International Assn. of Jazz Educators and the Mass. Music Educators Assn. Northeastern District. He has also served as a conductor for Vermont’s District 6 Jazz Ensemble, the Maine All-State Jazz Ensemble, guest lectured at the New England Conservatory, and is the recipient of a Jiffy Lube/Middlesex News Excellence in Education award.

As a trombonist, Mr. Piermarini has performed with a wide variety of ensembles and artists, including the Boston Pops, Steve Lawrence and Eydie Gorme, Aretha Franklin, Jon Faddis, Bob Hope, Slide Hampton, Frankie Valle and the Four Seasons, Bill Watrous, the orchestras of Jimmy Dorsey, Artie Shaw, Harry James, Peter Duchin, the Guy Lombardo Orchestra, and the Ringling Bros. Barnum & Bailey Circus. As a member of Boston’s Winiker Swing Orchestra, Mr. Piermarini performed at the 1993 presidential inaugural ball in Washington D.C., and the closing of historic Boston Garden, for which he arranged music for the live television broadcast. In 1998, Mr. Piermarini toured with jazz trumpeter Arturo Sandoval’s Hot House Big Band, including performances at Carnegie Hall and the Newport Jazz Festival. Most recently, he has been performing traditional jazz with the New Liberty Jazz Band, and featured as a soloist and arranger with the Hal McIntyre Orchestra in performances throughout the Northeastern U.S. Mr. Piermarini’s recording credits include the New Kids on the Block, a film appearance in Paramount Pictures’ “School Ties,” two CDs with the Boston Big Band, and Ed Straummen’s CD, “Dedicated” on MMC recordings. His arrangements have been performed by the Claflin Hill Symphony, the Thayer Symphony Orchestra, and the Concord Band.