The Leominster Colonial Band has featured the music of composer Domenico Villoni for more than 80 years. This Italian-American musician was one of the leading composers of the "marcia sinfonica" style which was popular with the many Italian bands which existed in the Italian immigrant enclaves in the U.S. Until we recorded our CD, "Number 17!" in 2005, no public information was available about this fine composer. Thanks to our connection with his grandson, Don Villoni, we are proud to make this biographical information available to researchers via this web page. 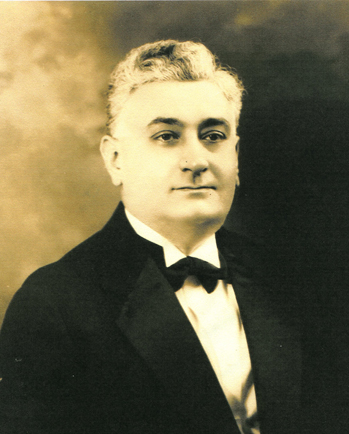 Maestro Domenico Villoni was born December 28, 1887 to Raffaele and Carmela (Di Rubbo) Villoni, in the town of Bellona, Italy. As a young child he exhibited a great interest in music and studied at the musical conservatory he attended in Caserta, where he excelled in music theory and composition. On June 5th 1903, the 15 year old prodigy boarded the S.S. Phoenicia in Naples to immigrate to the U.S. He married Giuseppina Rizzo in June of 1906. They had one child, Ralph Villoni, who was born in 1907.

The Villonis settled in the Cleveland, Ohio area, first in Lakewood and later in North Olmsted, where early on Domenico established himself as a prolific composer of symphonic marches, publishing all of them himself. The actual printing of the compositions was even done by the Maestro, by means of hand-engraved lead plates, done in the intaglio process. Some of these original plates are still in existance, though many were claimed by a fire in the early 1940s.

By day, Maestro Villoni supported his family as the proprietor of a window shade company, where in the evenings he would use the large cutting table to lay out and collate his compositions. But he was also known in the Cleveland area as a prominent music educator in the Italian community and beyond. He taught for years in the Hiram House/Cleveland Settlement home, where he also organized a band. Many Cleveland musicians of Italiand and Greek origin can trace their musical roots to the tutelage of Maestro Villoni.

Villoni passed away at his residence in North Olmsted on December 15, 1945; just two weeks before his 58th birthday. He is buried in Cleveland's Calvary Cemetery. His widow, Giuseppina (Josephine) died in 1949. Son Ralph Villoni also enjoyed a successful musical career as a bassist which included performances with the Cleveland Symphony and Borscht Belt entertainer Mickey Katz. He also served for many years as an executive with the Cleveland Local of the American Federation of Musicians. He passed away in 1993.

Domenico Villoni's catalog consists almost exclusively of symphonic, military and funereal marches. Of his many compositions, the marches Celebration, Hermit, Liberty, Little Italy, Sweetheart, and The Angel stand out as having stood the test of time, and continue to be much-applauded staples of the few remaining traditional Italian symphonic bands in the U.S. Maestro Villoni believed in making the works playable by these bands with a minimum of rehearsal time, making them approachable by bands of all ability levels.

*Villoni's birth year is erroneously given as 1888 on his application for U.S. passport in 1920.
Credits